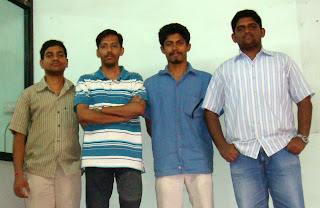 Four of us- Rahul, Yatin, Babaji and I (Harish) met today looking forward to a fun-filled SHG meeting. A friend was kind enough to lend us his office premises to conduct our meet.

We started with 5 minuites of meditation, to relax our minds and get refreshed for the meeting ahead. Getting started, we then had a round of speaking anything about ourselves by consciously using a technique. The idea was getting used to talking by using techniques, which we often find difficult in real world.

Then each of us shared a recent stuttering incidence and how we handled it. It was good to see that post the incidence; none of us had those dark spells of guilt and fret.

Then it time for a rapid fire game. In which we had to complete the sentence with any word that first comes to our mind. The sentence was: “I am a _______”.

After the rapid fire round, we had a similar round, but we could take time to think before talking. The theme of this round was- “If I was not a stutterer, then _____”. A great outcome of this round was all of us unanimously spoke about what we would have missed, if we were not stutterers. None of us had any grudges and regrets of being a stutters. The whole idea of this exercise was to realize that stammering is not too bad after all, and it has helped us into making a better person than what we would have been if we were not stutters.

Then it was time for some fun- Communication Games!

First we played a game called – “Freeze and Go”. Two of us had to enact a scene. The third person would shout – “Freeze” in the middle of the act, and both the role-players had to freeze. Then again the third member said “Go”, and this time, the role-players had to enact a scene which was completely different / opposite from the one that was being played. This game was aimed at learning to co-ordinate with your partner without having a chance to plan (impromptu). Rahul and Yatin started by playing a situation in which a Dentist(Rahul) is persuading his patient(Yatin) to get his tooth plucked, after a few “Freeze and Gos”, they were playing aliens from Mars. Babaji and Harish started by with a scene in which a karate instructor (Babaji) trying to teach a beginner(Harish), and ended up playing Gangster trying to threaten an innocent guy asking for a ransom.

In another game, two of us had to again enact a role-play. Other two had to evaluate and give their feedback. We then had to enact the same scene again trying to incorporate the feedback given in the evaluations. Babaji and Harish enacted a role play in which Harish tried to sell Babaji his watch. Rahul and Yatin enacted a similar scene, in which Yatin tried to sell his goggles to Rahul. The idea of this exercise was trying to prepare ourselves into putting into practice the feedback / suggestions that we receive from others.

Finally, each one of us gave a speech. Harish and Rahul had come prepared with a speech. Harish narrated the story “Izabella”, and Rahul spoke about four virtues required to learn Yoga. Babaji and Yatin were given impromptu situations on which they had to speak-

Babaji: If you were Anna Hazare, what would you say in your speech….

Yatin: If you were the Chief Minister of Goa, what would you say in your speech….

We then had a casual discussion, in which we discussed lots of things like Sujit (the PWS who participated in MTV Roadies) and things to do in SHG meetings. We parted away with a promise to meet again soon.

Wow- I want to give Supari to Babaji for couple of guys in Herbertpur!

Really wonderful Goa PWS. Keep going Meet atleast once in 15 days. All the best to everyone.

@ Dr. Sachin,
Babaji almost killed 3 of us with his acting skills :)

@ Manimaran
Thank you so much. Yes, we do intend to meet regularly...

@ JP
You are welcome anytime.

this group sounds interesting, can i get some more information about it