This is a short story of complex social and personal events leading to the beginning of The Indian Stammering Association (TISA).

Help from Overseas
Up to March/April 2006, several Indian people who stutter had contacted other National Associations (British, American) asking for help. These requests filtered to the International Stuttering Association. Keith (representing ISA and BSA) had joined various Internet groups of people who stutter who were looking for ideas, debate and to exchange information among themselves and SLPs/SLTs (the professionals who try to help pws). He was also aware of Indian people who stutter requesting help, requesting information, asking about different treatments and complaining that their therapies did not usually give good long-term results.

The ISA asked Keith to take the lead on this project because the help available to people who stutter in India appeared to be sparse, and uncoordinated. His Internet searches led him to think that there were several treatment sites and limited up to date general information but nothing of any national stature. He started a project in the summer of 2006, to inspire a group in India. A small, but expanding team of Indian people who stutter (living in India / UK / USA) gradually formed; It consisted of - Prakhar (ISAD paper), Prem (represented India at Croatia conference), Shyam, Tanveer, Hetal, Akash, Murtuza, Sandeep etc. A website was started. But people never met as a group and individuals moved on; the group scattered away in a few years.

Beginning at home
Dr Satyendra (sachin) Srivastava, a pws and a social worker from Uttarakhand, visited a Fluency Specialist in Pune, in 2005; He paid Rs 3000/- for a 2 hour consultation. After a few months, he realized that nothing much had changed for him, in spite of this good consultation. His further search for healing and wholeness, took him to a chance meeting with the "Silent Saint of Yamuna valley" in 2006 (link). In a meeting lasting just a few minutes, he felt free from shame, fear and guilt (described here). Sachin realized that this had happened because the saint had heard him whole-heartedly, without any judgement, with no ulterior motive. This was something which one pws could easily do for the others - listening with empathy and acceptance. This was the beginning of TISA. He wrote "Twelve Questions" in Hindi and English, followed by a self help book- Apna Hath Jagannath; started a blog and went public about his own stammering - with a vengeance!

Soon, many pws began getting in touch through the blog (http://t-tisa.blogspot.com/), IPWS yahoo, Orkut etc - and soon a community of pws came into shape; Some of them decided to do the next courageous thing - meet in person (see the pics below)! 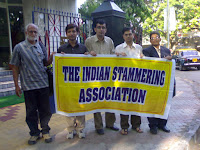 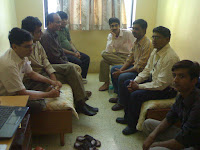 Mumbai Meet
Nine IPWS met in Mumbai for the first time on 13th April 2008- after considerable planning and preparation, to deliberate about formation of TISA. In this face to face meeting, they discovered that their unique speech issue offered not just a common basis of empathy and understanding (in spite of many differences) but also a strong imperative to act together. They knew what it meant to stammer through their adult lives. They also realized that among their group, they had diverse skills, experiences, energies and potentials. They decided to form a group, start a simple website, help each other by sharing information and encouragement, promote SHGs and keep the organizational structure simple but highly functional.

Communication workshops
Since Sachin had worked in social sector, he realized that for dealing with stammering, an interactive workshop is a better approach than 121 clinical setting. In fact, stammering should be seen as a social issue- and not a medical problem. First ten day Communication workshop was organised in Herbertpur in 2010 (link). He was convinced that pursuing Communication as a goal, serves a pws much better in life than chasing Fluency. Hence the workshop focused on practical communication skills based on stuttering modification approach.

It also promoted Acceptance as a practical need, to begin the change; a first step in a long journey - and also as a spiritual act: accepting the present moment, instead of resisting and denying it.  A series of workshops followed (Kolkata, Delhi). Mr Manimaran sponsored many workshops in Chennai (link). Later, experienced pws began running these workshops on their own (Lucknow). 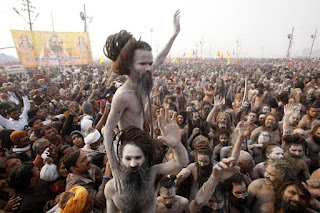 National Conference (NC)
JP, a young IT professional from Pune, searching for relief from his stammering, decided to give a try to the young TISA. He came to Herbertpur on a  six month sabbatical and worked - shoulder to shoulder- with Sachin as a volunteer. In the process he learned a lot about his own fears and issues and how to challenge them. He proposed a national get-together one day. Sachin was skeptical but went along. Bhubaneshwar event (link) in 2012, was a watershed event. It convinced Indian pws that, moving away from pernicious ideas of therapy, towards acceptance and fun is possible in India. It became a much awaited annual event - something like a Kumbh Mela!

New Groups, New Frontiers
In 2012-2014, there were just a few groups: Herbertpur, Chennai, Mumbai, Delhi, Pune, Banglore. Later on, often with a strategic workshops, many more cities were energized into starting a self-help initiative: Lucknow, Manglore, Surat, Chandigarh etc. Many talented pws enriched this process, promoted it on various platforms, made documentaries, recorded songs, wrote profusely, started whatsapp groups, launched TISA android apps, initiated discussions on "workplace and diversity". But running groups consistently over a long period of time was and continues to be a challenge, since stammering has a variable nature and volunteers sometime lose steam or get busy with other projects in life. Banglore SHG bravely documented these ups and downs over the years and also how they managed to stay on course (Feedback, Sudhi). Banglore group also took up theater in a consistent and systematic way, facilitated by a theater artist who stammers.

Ideological Battles
Many new comers joined TISA because it was so much fun! They did not care or bother to understand the philosophy of self-help and acceptance. They wanted to promote "my therapist", "my technique". Some SLPs thought of TISA as a captive market, just waiting to be exploited; So did, people selling DAF machines or other paid programs: they wanted to announce to TISA how good their gadget (or the program) was, with little regard for self-help or understanding of it. Some pws felt that TISA must focus on getting "better", should insist on practicing "techniques" (as they do in "Cure centers"), should collaborate with SLPs and negotiate better fee for them!  TISA had to constantly resist these tendencies, pushing it away from the path of self-help.

TISA, on the other hand, was trying to go beyond all this, in a BIG paradigm shift - from "stammering as a disorder to be cured, no matter what" to "stammering is a diversity: accept us and listen to us patiently". In stead of running "three week intensive" to change our speech, we wanted to get in touch, have fun, celebrate and help each other in practical ways. We believed that LIFE was happening here and now. And it can not, should not, be postponed till someone "fixes" us. Pws, who had been brain-washed by "sellers of techniques" had tough time understanding these subtle strategic shifts and often tried to hijack the agenda. But with every NC, an expanding core group of young pws began to emerge, which understood the correct meaning of acceptance and the need to celebrate our uniqueness.

Blog or website? Why not both?
While the blog had survived since May 2008, a simple (Joomla) website too was launched in Aug 2009 (link). While free blog could be managed easily by an individual, a website, however simple, needed annual subscriptions and a team to update and manage it. But many IT professionals thought that TISA deserved a proper website and it was set up. The website inspired many pws to share personal testimonies, contribute write ups, share photographs, announce events etc. Sometime in 2015, the site became inaccessible, ostensibly, because someone had forgotten to pay up the subscription! Anyway, after Goa conference, once again, the tech-savvy gang in TISA went in a huddle and launched a better website with the same url (stammer.in). Another group said: why not keep the blog going- as a sand room for the newbies to practice?

Other than the old blog and the new website, year 2016 saw a huge growth of whatsapp groups, started by individuals, SHGs, women and others - discussing stammering and myriad other issues and interests. Some volunteers organised Google hangouts while others played with skype conference calls. Interestingly, IT professionals outnumbered other streams (lawyers, doctors etc.) within TISA community. This amply reflected in the way we communicated, collaborated and the way we went about planning events like National Conference.

Do women stammer?
Of course not! Many Indian male pws sincerely thought that women can not stammer! But every NC brought out at least 1-2 women who stammered. Goa NC (2017) had about ten WWS (women who stammer). This was a good education for the community. If men suffered because of stammering, women who stammered, suffered even more (link). And still they took courage and stepped out of the closet, into the large gatherings. Some wws challenged themselves further by getting involved with setting up new SHGs and NCs. When they began joining whatsapp groups, we had to learn respecting privacy and treating women as equals. On the whole, presence of women in the movement has enriched and humanized the whole experience.

We have survived many challenges and continue to be a healthy vibrant open community, promoting self-help, acceptance (of our diversity), over-coming stammering and realizing our deeper creativity and potential as a special human being. We continue to be inspired by our own models like world wide Vipassna, ancient models of social service (Sewa in the highest sense) and 'unity in diversity'.

This has been possible largely because of constant fortuitous supply of volunteers and friends with diverse skills, who have steadily taken up various responsibilities - from fund-raising, media-blitz, maintaining the website to coordinating the movement itself. Dhruv (Mumbai) steered our first online fund raising effort in 2015. Manimaran, JP and Harish came forward at the right moment to fulfill a central coordination function. Many more friends have sprang up in recent years. Some have moved on; some have looped back after a gap. They continue to inspire and sustain this movement.

But certainly, there are miles to go yet and we can not afford to block or pause - for too long! Our hope for future is to create a movement which is truly Indian - which helps pws see themselves and others as inherently perfect Aatma (spirit), and serve one-another in that light - as a sadhana, as a celebration, as a Sewa.