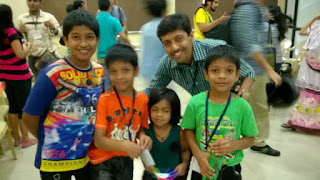 The legend goes that a mother wanted to help her child who stutters. In her quest, she reached out to many more children who stammer, their parents and also SLPs. And thus, the idea of FRIENDS convention was born.

In 2015, a young man dreamt of replicating the idea of “Friends” in India. The Mumbai self-help group coordinator Dhruv Gupta, who was the one to dare to dream this, also dared to materialize it. And thus, the first Friends convention was held in Mumbai, on 23-24 May in the beautiful campus of Somaiya College.

The event was co-organized and supported by TISA. Among the co-facilitators were two speech therapists from USA (Dr. Joe Klein PHD CCC-SLP is a person who stutters and an assistant professor in Appalachian State University’s Department of Communication Sciences and Disorders. Noura Embabi is a CCC-SLP from the Center for Speech and Language Pathology in Conneticut.), and facilitators from TISA- Vishal Gupta from Delhi, the enthusiastic Mumbai SHG group with Dhruv overseeing the entire thing… And yes, I was one of the facilitators in the TISA facilitator’s team.


Overall fifty participants included children who stutter, their parents, adults who stammer and the speech language pathologists from Nair Hospital.

The convention was aptly organized to introduce the self-help approach to stammering to the children and off course, more importantly their parents. It was very encouraging to see an overwhelming response and participation from the SLPs. There were parallel events held for children, adults and parents. Parents were educated on stammering and some dos and don’ts to help the child who stammers. Interactive sessions, games, skits… in all a fun-filled event.

Personally for me, interacting with the parents and the SLPs and their radical change of view as we reached the end of day two was the BIGGEST take-away of this event. The parents were pained to see their child stutter and put on best efforts to “change” their speech. But it was heartening to hear this coming from one parent on day two- “All this while it was we who wanted to change our children, but now we realize that it’s we who have to change”. This shift in the thought process I believe is one of the most fulfilling achievements of the event.

What was also encouraging was the eagerness and openness of the SLPs to the self-help approach. On interaction with a few SLPs, their keenness to work with self-help and belief that “therapy + Self help” will help the child who stutters a long way and their willingness to work with us opens a HUGE prospect in store for the near future.

Dhruv dreamt of reaching at least one child, and let him know that he is not alone. When Sachit (a 8-10 year old participant) said on the microphone that, “…before coming here, I thought I was alone, and now I saw many BIG people stammering and successful in life”, this must have been the best feeling of contentment and achievement for him. Sachin along with other kids, won the hearts of many present in at the event.

With this, we have opened the door and beyond the door lie opportunities galore. It’s now upto us (TISA as an association) to go ahead and explore. Yes there is hope... if we talk and reach out, world will change.

Kudos to Dhruv, Mumbai SHG and everyone involved in organizing the event.
Posted by Harish Usgaonker

Thanks Harish!
i couldn't agree more...
I was hoping for some videos and pictures too...
As long as we learn, we remain relevant...
We must take up the cause of cws. We have been there once - not too long ago...

Thank you for this wonderful write up Harish! You summed up everything so well...wow :). Yes, let's replicate this! It can and must be done again and again..each time in it's own unique, beautiful way :)

Thanks Dr. Sachin and Dhruv! Yes, I'm sure there will be many "Friends" to follow :)

Yes, we all need FRIENDS, who can see BEYOND our stammering and other "surface attributes". Especially true when we are children. Unfortunately, everyone at that period wants to keep quiet and hence a cws retreats in an inner world.. Let us change all that..
To paraphrase an old time worthy: If not now, when? If not we, who else?
Thanks Harish for your active participation and documentation..